Keeping an Operating System (OS) up-to-date is essential for obvious security reasons. But updating an OS blindly is strongly discouraged. An Operating System is part of an infrastructure which has a lifecycle managed by CICD pipelines, exactly as the application running on the aforementioned OS. The best solution is to have an AMI Factory to build new AMIs regularly or when required, to include a security update for example, which will be part of our CICD pipelines. Unfortunately, it is not always possible to terminate an instance and launch a new one with the new AMI. Typically, non stateless applications, like Databases should be terminated only as a last resort. Therefore, the only solution is to log into the server and do the update. Moreover, the same principle can be applied to server/application configuration. There is no reason to launch a new instance and have to wait 10 min to change a single property. Reverse proxies are one of the best example, we can change and reload the configuration without any downtime.

Of course, logging into the server and modifying anything should absolutely not be a manual operation. AWS Systems Manager Run Command can help us to easily automate these operations.

AWS Systems Manager Run Command lets you remotely and securely manage the configuration of your managed instances. A managed instance is any EC2 instance or on-premises machine in your hybrid environment that has been configured for Systems Manager. Run Command enables you to automate common administrative tasks and perform ad hoc configuration changes at scale. You can use Run Command from the AWS console, the AWS Command Line Interface, AWS Tools for Windows PowerShell, or the AWS SDKs. Run Command is offered at no additional cost.

Administrators use Run Command to perform the following types of tasks on their managed instances: install or bootstrap applications, build a deployment pipeline, capture log files when an instance is terminated from an Auto Scaling group, and join instances to a Windows domain, to name a few.

To be able to Run a Command on an EC2 instance we need:

As an example we are going to execute the following commands on a remote instance:

To do so, we can use the CLI with the document AWS-RunShellScript (provided by AWS) and Instance IDs (or Tags present on the EC2 instances):

We can then check the status of the execution:

In this example the execution ended in success and we can see the result of the pwd and ls commands in the StandardOutputContent property.

With the document AWS-RunShellScript, we can easily execute Bash commands (for Linux OSes only). In addition of the parameter commands, we can use workingDirectory to execute the commands in a specific folder and executionTimeout to avoid having the command run for hours when we know the average execution time when everything is running smoothly.

For Windows, we have a similar document named AWS-RunPowerShellScript with the same parameters (commands, workingDirectory and executionTimeout).

AWS-RunShellScript document is an easy way to execute one-shot simple commands. For more complex scripts we can either use AWS-RunRemoteScript that will retrieve a script from Github or S3, and execute it, or we can create our own.

In this example, we create a document we the same bash commands we passed to AWS-RunShellScript commands parameter.

It is worth mentioning that using Cloudformation to create SSM Documents comes with one limitation. We cannot give a name to the document (the name of the document created in this example is s-ew1-demo-ssm-documents-SsmCustomDocument-M0BYFGP4T9Z8).

We can then execute the document like previously without the need of extra parameters:

The result is the same as before.

To execute Ansible playbook AWS provides the document AWS-RunAnsiblePlaybook. But it is limited to Playbooks stored in Github or S3. And as mentioned in the article Provisioning EC2 instances with Ansible, only source repository should be used to version Ansible Playbooks and Roles.

But creating a document supporting AWS CodeCommit is quite simple:

We have defined 4 parameters to make the document reusable and the commands are quite straight forward (see. Provisioning EC2 instances with Ansible for more details). Only the second one is a little more complex. It is a workaround to AWS CodeCommit throttling limit. If the git clone command fails, we retry it at most 5 times waiting 1 to 30 seconds between each retry.

We can then use the AWS CLI with the new document:

For this example, the output StandardOutputContent of the execution is as follow:

And the error output StandardErrorContent is:

To avoid the warning we can add the parameter -i localhost, (the comma is required) in the ansible-playbook command:

In order to make the script fail when a command fails we need to add the command below after every command:

But now if there is an error we won’t remove the folder /root/asbpb at the end, which is a problem. If this folder is still present the next time we execute the Document, the command git clone will fail. The easiest solution is to try to remove it at the beginning of the script:

Commands output and errors can be logged into AWS CloudWatch and/or an AWS S3 bucket.

AWS CloudWatch LogStreams will have the following patterns:

For automation, the AWS CLI is not the best tool. With AWS CloudWatch Rules we can execute SSM Run Commands triggered by an event or on a schedule.

This can be useful in 2 ways: 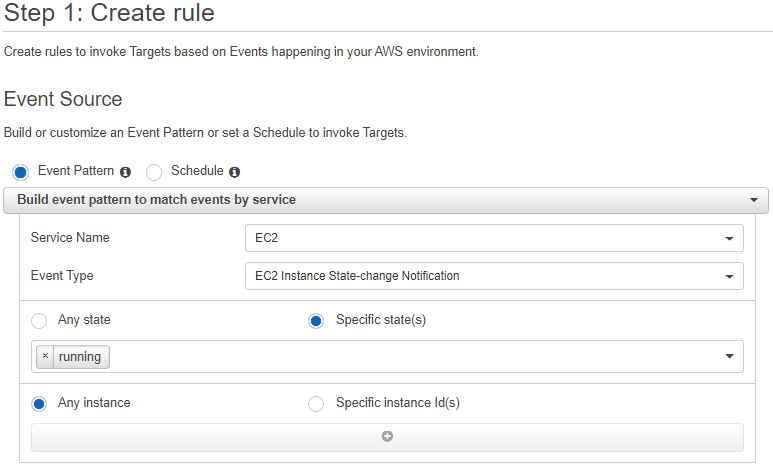 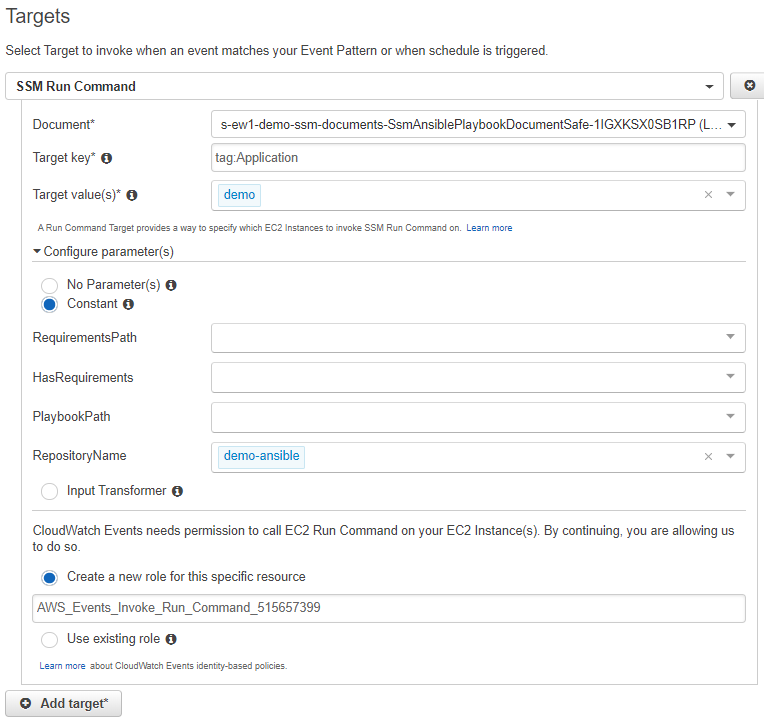 Unfortunately, this feature comes with several limitations compared to what we can do with the CLI or the SDKs. It is not possible to define:

Using Python and Boto3, we can execute an SSM Run Command this way:

To know which event triggered the lambda (a new EC2 instance or a CRON), we need to check the event source:

Furthermore, it is important to note that if we install the SSM Agent in the user data, the event "EC2 Instance State-change Notification == RUNNING" trigger the lambda too early for AWS Systems Manager to be able to contact the Agent.

We have to wait the status check OK and sometimes a little more time after that before invoking ssm.send_command():

While AWS Systems Manager Run Command is a little rough on the edges and requires a little work to build something useful, it is a wonderful service that can be use without any additional charges.

We accelerate your journey to the Cloud.

We help organizationsof all sizes and complexities – public or private – make their cloud transformation journey a success.

Discover our cloud services and solutions.

Schedule a 1-on-1 with an ARHS Cloud Expert today!